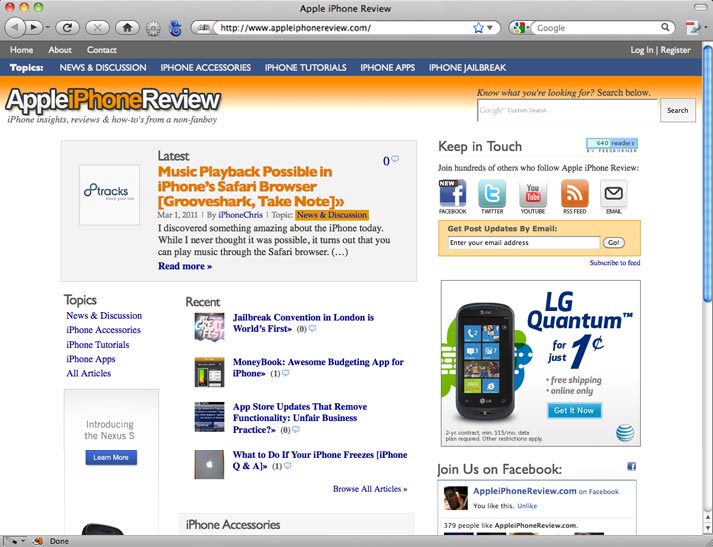 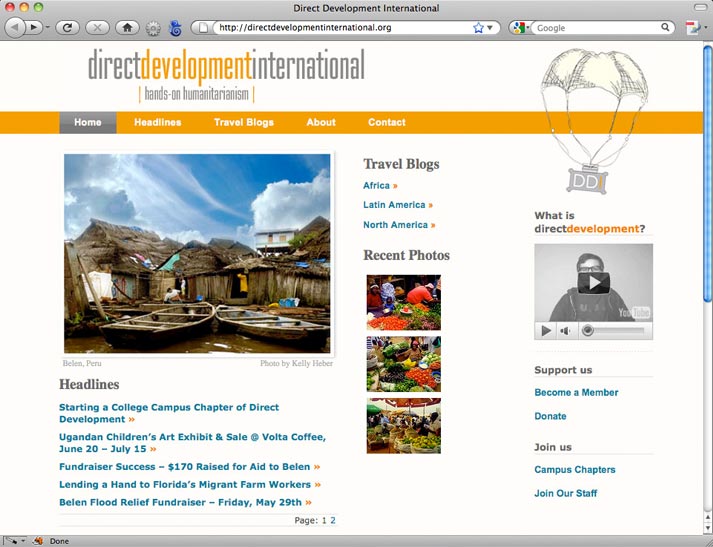 What My Childhood Rock Collection Taught Me About Life

When I was a kid, I collected rocks. Wherever I went, I would stare at the ground seeking stones to add to my little box of drawers. Over the years, I accumulated (found and purchased) nearly a hundred small rocks from around the country — thanks to family road trips. 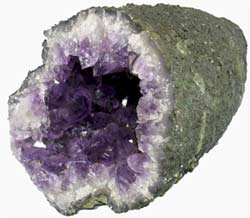 Among my favorite rocks were the geodes, especially the amethyst. A geode is a sedimentary or volcanic rock with internal crystal formations.

What always fascinated me about my amethyst geode was the dual nature of this rock. On the exterior, it is rough, grey and uninviting, but crack it open and a magnificent cavern of vibrant violet crystals is exposed.

As we grow up and we endure life’s elements, we may become worn and develop a harsh exterior. We might stop talking to people for fear of rejection, or stop taking risks for fear of failure, or become afraid to love and be loved because of the difficulties it may cause us.

Like Paul Simon of Simon & Garfunkel, we risk becoming rocks. As the classic ballad goes, we “build walls, a fortress deep and mighty, that none may penetrate.”

It takes work and care to chisel open a geode, but it is worth the trouble. What we discover when we get past the rough outer shell is a beauty and splendor we might never have imagined was there.

The No-Facebook Diet: Why I’m Giving Up Facebook for 46 Days 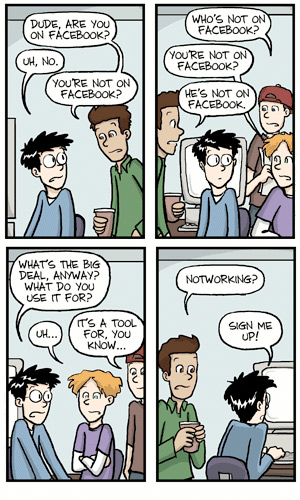 Although not for religious reasons, I am participating in Lent this year by making the ultimate 46-day sacrifice. I am giving up Facebook.

These days, the idea of unplugging from the mother of all social networks seems downright, well, anti-social. Don’t we all have a Facebook friend or two who has at some point deactivated their account? The reactions of friends range from “This won’t last,” to “Now how will we keep in touch?” to “Is she crazy?”

It’s as though Facebook has a monopoly on our social lives. Go to the page in your Account Settings where you deactivate your account and the first thing you’ll encounter is five images of you with friends, just some of the people Facebook assures you “will miss you.” As if Facebook were the only way to stay in touch.

I’ve been on Facebook for only three and a half years, and — although I have curbed my addiction in recent weeks — I have no doubt spent thousands of hours on this single website. Having it on my mobile phone ensures that any instance of boredom can be cured by browsing my News Feed, commenting on friends’ photos and reading and “liking” interesting articles. I hope that giving up Facebook will free up this time and mental energy to devote to more productive and rewarding endeavors.

It’s not that I am against Facebook. In fact, there are many benefits to embracing your online life. And I am a proponent of the social web as a tool for democracy.

At the same time, I want to learn about my friends’ lives because they share things with me personally, not because I read their status updates and view their photo albums anonymously. I want to wish friends happy birthday because I remember their birthdays, not because Facebook alerts me. And I want to learn new things by seeking out knowledge, not by having it dumped on me in a massive, random stream of data shared by 500 different friends.

The truth is, most of my best friends rarely interact with me on Facebook anyway. We make contact over the phone and in person. We share experiences in real life.

While on the No-Facebook Diet, I will pursue my career goals, engage in real experiences and nurture new relationships the old fashioned way. I will maintain my actual social network without depending on an Internet company to manage my relationships. I anticipate a newfound sense of liberation in life without Facebook.

I’ve made some strong statements in this post, but the truth is I’m not sure exactly what effect this sacrifice will have. I’ve only been on Facebook a few years, and I can’t remember life without Facebook. That’s what disturbs me the most.

One exception: I reserve the right to click the “Share” button below my blog posts in the next 46 days to share stories from this blog on Facebook. Doing so takes me to a blank page and keeps my home page and News Feed out of sight. 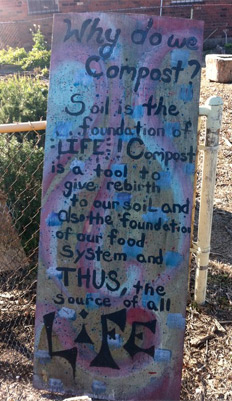 Last weekend while in New Orleans, I visited Our School at Blair Grocery, an alternative, hands-on school and non-profit organization focused on teaching youth in the Lower Ninth Ward the principles of urban farming and sustainability. Our School at Blair Grocery is not just some agricultural magnet school. Rather, it is a place of hope and empowerment for youth in one of the nation’s most impoverished and crime-ridden communities — the hardest hit in New Orleans by Hurricane Katrina.

I first learned about the Blair Grocery initiative when it was covered in the New York Times last month. See: New Orleans School Sows Seeds in Lower 9th Ward. I was moved by the story and shared it with a friend who is a New Orleans resident.

A couple weeks later, I received an invitation on Facebook to a talk in Gainesville by someone with a familiar name, Nat Turner. Turner, as he prefers to be called, is the founder of Our School at Blair Grocery. At the event, he told of his journey from public school teacher in New York City to pioneer of one of the nation’s most inspiring urban agriculture initiatives in New Orleans’ Lower Ninth Ward.

Dissatisfied with his job in New York, Turner moved to New Orleans to help with the restoration effort after Katrina. He described a period of uncertainty where he knew he wanted to make a positive impact but was not sure how to apply himself. Given a little time and a number of revelations — including the reminder that, whoa, food comes from the ground! — Turner taught himself all he could about growing organic vegetables. Meanwhile, he began offering free tutoring sessions to kids in the Lower Ninth Ward out of his now-iconic blue school bus, and acquired a plot of land from an old, rundown grocery store to convert to a school. That, in a nutshell, is how Our School at Blair Grocery was born. 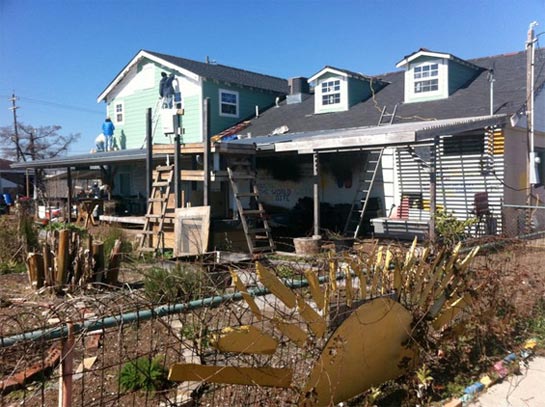 Although class was not in session when I visited, it was evident that the school is a thriving enterprise. Upon arriving with a couple of friends, we were greeted by a group of people who were laboring to renovate the building’s exterior. After knocking on the classroom door expecting to find Turner and perhaps a few others, I was startled to see 10 or 15 adults turn their heads toward us as we interrupted a strategy meeting.

Turner was kind enough to take a break from the meeting and show us around. The tour began at the giant compost heap, which is comprised of food scraps that are acquired free from local restaurants and grocery stores. The scraps in the pile decompose and are then fed to worms to produce nutrient-rich castings. “Everybody poops, but worms poop gold,” Turner joked. This golden poop is the lifeblood of all of the crops grown at the school.

The compost pile was an appropriate starting point for the tour, given that compost is, as a hand-painted sign on the property reads, “the foundation of our food system and thus, the source of all LIFE.”

We were then shown inside one of the school’s many small greenhouses (or “hoop houses”), which contain shelves of sprouts that are sold at $20 per pound to high-end food establishments in New Orleans, including Whole Foods and Emeril’s Restaurant. The sprouts are an easy sell because businesses love the idea of supporting local food and disadvantaged children, Turner said. This revenue is an important source of funding for the school, along with earnings from a weekly farmers’ market, which we also attended on Sunday.

“You can change the world with every bite.” – Wise words painted on one exterior wall

It is clear that Our School at Blair Grocery is deeply driven to not only produce local food (and tons of it), but to enrich the lives of young people in the process. We were not fortunate enough to meet any of the students — since class is in session Monday through Thursday, and we visited on Friday — yet their presence was evident in the youthful character of the school. The school walls are painted with inspirational quotations and the property is adorned with signs that teach human values.

The students also play a role in tending the many garden beds and rows, and selling the produce to food establishments. They are taught important skills in the process. Composting teaches math, as students calculate the appropriate ratio of green materials to brown materials. Sign-making and sales offer lessons in marketing and entrepreneurship. And the students are quizzed on readings and films about food security and sustainability.

The students work hard, and they reap the rewards. Not only does the school award them fresh produce and a minimum wage — both of which help to support their struggling families — but they are taught that they can be somebody in a world that otherwise regards them as nobodies.

“Faith in the fact creates the fact itself.” – Quotation on the business card of Turner’s teammate Rob

In his talk in Gainesville, Turner spoke of the skeptics and nonbelievers who have little hope for the youth of the Lower Ninth Ward. In a community with such poverty and a serious juvenile crime problem, keeping kids out of trouble — nevermind inspiring them to lead rewarding and successful lives — is next to impossible.

Luckily, to Nat Turner and his team, “impossible” is not a forbidden territory, but an alluring challenge. One that they are seeing through. 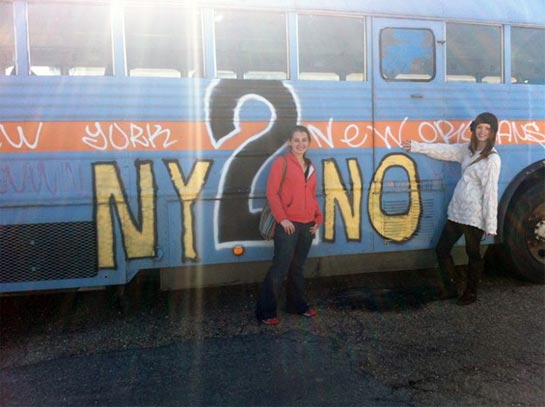 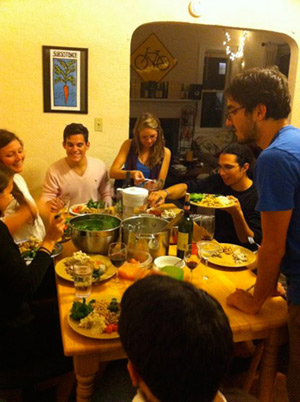 With all the talk of what to eat, what not to eat, and how much to eat, we often fail to consider one factor that is equally as important to our wellbeing, and that is how to eat.

Yet it has been shown that children who eat dinner together with family are happier and less troubled as a result than those who do not. And I think these benefits apply to friends who eat together, too.

For the first time since I moved out of my parents’ house four and a half years ago, I live in a household with roommates who value eating together. For months, the four of us have regularly cooked together and dined at the table together. We also regularly have friends over for dinner. In my opinion, there is no better way to cherish life and companionship than to share food with friends.

This communal spirit around food has, without a doubt, contributed immensely to the positive atmosphere in our home. And in times when we eat together less frequently, it is obvious that something is lacking.

When I moved to Gainesville four and a half years ago, I never expected that it would be the vegan-friendly paradise that it is. Although there are no 100% vegan restaurants — somebody please correct me if I’m wrong — most restaurants offer vegan options. We also have two local tempeh manufacturers, Jose’s Tempeh and Artie’s Tempeh. As a result, you can find tempeh dishes at many Gainesville restaurants.

Below is a list of my 12 favorite vegan meals at Gainesville restaurants, in no particular order. Warning: Tempeh haters may find this list somewhat unappetizing.