Sustainability in the Netherlands

I recently returned to Miami from a 6-week study abroad stint in Utrecht, the Netherlands, and I’ve been thinking a lot about the way we organize our society compared to the Dutch. 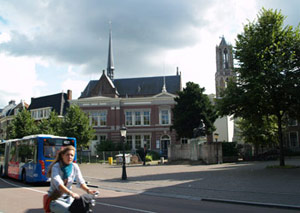 I used to think we could remedy the destructive car culture we have in the United States simply by adding more bus routes, bike lanes and metro rails to cities. But I understand now that doing that would only skim the surface of the problem.

Cars are less ubiquitous in Utrecht not because individuals have made a personal commitment to protecting the environment (wouldn’t that be nice?), but because the city design — among other things — discourages driving in favor of other ways of getting around.

Partly because of space constraints — a reality for most European countries —  cities in the Netherlands are organized around compact communities where people live, work, eat and shop all within a 5 or 10-minute walk, or an even shorter bike ride.

Not surprisingly, there’s not much incentive to drive a car that costs a lot to buy, fill up, maintain and insure. As a result, there is

In his TED talk The tragedy of suburbia, James Howard Kunstler talks about the need in America to define space in order to create “public spaces worth caring about.” Kunstler argues that suburban sprawl in the United States represents a massive misallocation of resources. We need to take some inspiration from Europe and reorganize our communities to the benefit not just of the environment but of citizens as well.

Of course, the solution is not as simple as superimposing the Netherlands model onto every society, because every region has its particular geographical, ecological and cultural concerns — the Netherlands is well-suited to bicycles because of the flat terrain, the cool weather and the frugal Dutch — but there has to be a more concerted effort in America to evaluate the needs of different places and to design a sustainable infrastructure accordingly.

That’s what’s emerging now, in part with the US Green Building Council, an increasingly influential non-profit organization that’s pushing the movement toward “Green Building” in the United States with its LEED standard. Tomorrow in Miami I’ll be attending the USGBC’s Natural Talent Design Competition, which will feature “progressive and innovative approaches to neighborhood design” from Emerging Green Builders. I’m looking forward to learning some new things.